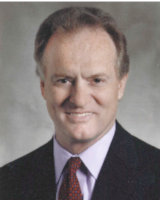 Byron Trauger’s practice is concentrated in health care, complex civil litigation, general business matters, government relations, and regulatory agency work. Mr. Trauger frequently advises health care providers on strategic issues and represents them before state regulatory agencies. He has several decades of experience in certificate of need matters. He also represents regional and national business entities in circumstances in which law and public policy or regulation intersect. Having been a federal prosecutor early in his career, Mr. Trauger is comfortable in the courtroom and frequently represents clients in complex business litigation.

Mr. Trauger began his legal career as a judicial clerk to the late Hon. Frank W. Wilson, United States District Judge for the Eastern District of Tennessee. He served as an Assistant United States Attorney for the Eastern District of Tennessee after which he practiced for two years with the Boston, Massachusetts firm of Bingham, Dana & Gould. In 1983 he returned to Tennessee to form the firm now known as Trauger & Tuke.

Mr. Trauger serves on numerous civic and charitable boards and has received the John C. Tune Award, the highest award given by the Nashville Bar Association. He has chaired successful campaigns for Mayor of Nashville and Governor of Tennessee. He is an active Rotarian and United Methodist, and he speaks fluent Spanish.